My good friend Henry from infoWAN in Germany asked me to post the following for him on my blog (in lieu of setting up one of his own at least for now).  Here is the tip that Henry discovered and was so keen to share …

My task was to replace an ILM 2007 Server with FIM 2010 R2 SP1 running on Server 2012. The newly configured FIM Server is being stood up alongside other systems connected to an Oracle Database Version 11g.  Here was my approach

This was as far as I got before I the install failed, reporting the Client Software could not be found as displayed below: 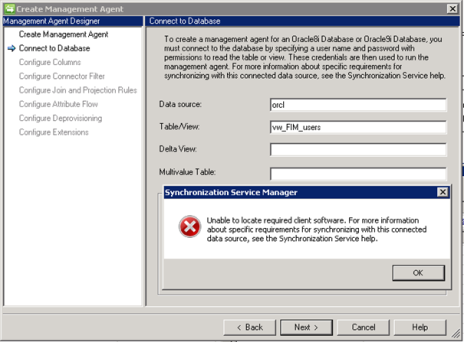 At this point I checked Oracle Database connection using SqlPlus and was able to open the View in question. Given this proved the client was installed correctly and the settings in the tnsnames file were also fine, I then checked file permission on the Oracle Client directory for the FIMSync Service Account as others had suggested in the same situation.

I then dug a bit deeper, using the Process Monitor to look up what was happening behind the scenes. The most important clue that led me the right direction was the highlighted access to a CLSID registry key which could not be found by the miisserver.exe:

Using the process monitor to identify a missing registry key

In the end I discovered that this OLEDB driver was NOT included in the Oracle client Software package. Instead it is included in 64-bit Oracle Data Access Components (ODAC) which can be separately downloaded at the Oracle web site.  This is the 64-bit ODAC 11.2 Release 5 (11.2.0.3.20) for Windows x64 – it contains 64-bit Oracle Provider for OLE DB 11.2.0.3.0.

Having installed the software, the registry key is clearly now available on the server and references the Oracle OLEDB dll – thereby enabling me to create the Oracle Management Agent on my FIM Box:

As it happens, I have a feeling I’ll be needing just this piece of vital info myself in the coming weeks …

This site uses Akismet to reduce spam. Learn how your comment data is processed.